Posted on September 3, 2015 by randscallawayffm

I love taking our grandkids to play the games at various locations that have an array of levels of abilities because they are all different ages. The game that is the most fun but most frustrating is Wack a Mole. It looks like a tic tac toe board. Then when the game begins a mole hops up where you least expect it. Your job is to wack it before it goes back down in the hole, racking up as many points as you can. This is my life. I wack a worry or concern and down it goes, then another challenging task draws my immediate attention, I wack it down. As the “moles” begin to come faster, I lose to the moles, game over.

Why in the world do I tell this story in connection to today’s passage? The chief religious leaders thought they had wacked Jesus down, done, finished, no more worries of losing their power and prestige, then along come Peter and John, full of the Holy Spirit of God, and they let loose once again on those who thought they “had it all together”. Game is NOT over. Jesus trained his guys well. God is in control of every situation. God still acts!

Acts 4, The Message
Nothing to Hide
4 1-4 While Peter and John were addressing the people, the priests, the chief of the Temple police, and some Sadducees came up, indignant that these upstart apostles were instructing the people and proclaiming that the resurrection from the dead had taken place in Jesus. They arrested them and threw them in jail until morning, for by now it was late in the evening. But many of those who listened had already believed the Message—in round numbers about five thousand!

5-7 The next day a meeting was called in Jerusalem. The rulers, religious leaders, religion scholars, Annas the Chief Priest, Caiaphas, John, Alexander—everybody who was anybody was there. They stood Peter and John in the middle of the room and grilled them: “Who put you in charge here? What business do you have doing this?”

8-12 With that, Peter, full of the Holy Spirit, let loose: “Rulers and leaders of the people, if we have been brought to trial today for helping a sick man, put under investigation regarding this healing, I’ll be completely frank with you—we have nothing to hide. By the name of Jesus Christ of Nazareth, the One you killed on a cross, the One God raised from the dead, by means of his name this man stands before you healthy and whole. Jesus is ‘the stone you masons threw out, which is now the cornerstone.’ Salvation comes no other way; no other name has been or will be given to us by which we can be saved, only this one.”

13-14 They couldn’t take their eyes off them—Peter and John standing there so confident, so sure of themselves! Their fascination deepened when they realized these two were laymen with no training in Scripture or formal education. They recognized them as companions of Jesus, but with the man right before them, seeing him standing there so upright—so healed!—what could they say against that?

15-17 They sent them out of the room so they could work out a plan. They talked it over: “What can we do with these men? By now it’s known all over town that a miracle has occurred, and that they are behind it. There is no way we can refute that. But so that it doesn’t go any further, let’s silence them with threats so they won’t dare to use Jesus’ name ever again with anyone.”

18-20 They called them back and warned them that they were on no account ever again to speak or teach in the name of Jesus. But Peter and John spoke right back, “Whether it’s right in God’s eyes to listen to you rather than to God, you decide. As for us, there’s no question—we can’t keep quiet about what we’ve seen and heard.”

21-22 The religious leaders renewed their threats, but then released them. They couldn’t come up with a charge that would stick, that would keep them in jail. The people wouldn’t have stood for it—they were all praising God over what had happened. The man who had been miraculously healed was over forty years old.

The evidence of the healed man stands before the court of leaders. There is no dispute, no charge. The testimony of Jesus as the ONLY ONE who saves, heals and brings salvation cannot be stopped. Why? Because Truth, (Jesus) defeated death, rose from the grave to save our souls and bring us back to God. He forgives all sin for all people. We cannot keep quiet about what we know! 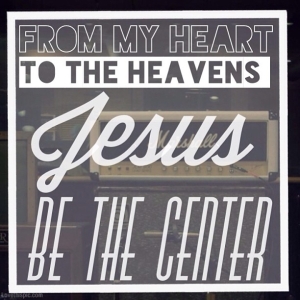 Dear Heavenly Father, Thank you for the boldness and clarity that you gave to Peter and John that day. Thank you for the opportunities that jump out at us every day. Fill US with Your Holy Spirit to speak the right words at the right time so that the world may know You love us and save us from our sin.
In Jesus Name, Amen

1 Response to ONLY THIS ONE…JESUS!