Posted on September 29, 2015 by randscallawayffm

Singing to a captive audience!

When Paul writes to the Romans and says, “And we know that God causes everything to work together for the good of those who love God and are called according to his purpose for them”, (Rom 8:28, NLT) he is speaking from experience! When doing the work of God, there will be hard times that will end well because God works through it all. So, if you are in a messing situation at present, know that God knows and is already at work and will provide a way out, a look up and a life with a good ending. “Trust and obey, for there’s no other way to be happy in Jesus, than to trust and obey.”

Paul and Silas have healed a fortune teller of possession of an evil spirit. The owners of the fortune teller do not like this one bit for they were making a of money from her “telling”. They are beaten and thrown into jail, with a chance to mention that in the Roman colony they are in, that they are also Roman citizens. Here’s what God did to work all things for good…

Acts 16, The Message
22-24 The judges went along with the mob, had Paul and Silas’s clothes ripped off and ordered a public beating. After beating them black-and-blue, they threw them into jail, telling the jailkeeper to put them under heavy guard so there would be no chance of escape. He did just that—threw them into the maximum security cell in the jail and clamped leg irons on them.

25-26 Along about midnight, Paul and Silas were at prayer and singing a robust hymn to God. The other prisoners couldn’t believe their ears. Then, without warning, a huge earthquake! The jailhouse tottered, every door flew open, all the prisoners were loose.

27-28 Startled from sleep, the jailer saw all the doors swinging loose on their hinges. Assuming that all the prisoners had escaped, he pulled out his sword and was about to do himself in, figuring he was as good as dead anyway, when Paul stopped him: “Don’t do that! We’re all still here! Nobody’s run away!”

29-31 The jailer got a torch and ran inside. Badly shaken, he collapsed in front of Paul and Silas. He led them out of the jail and asked, “Sirs, what do I have to do to be saved, to really live?” They said, “Put your entire trust in the Master Jesus. Then you’ll live as you were meant to live—and everyone in your house included!”

32-34 They went on to spell out in detail the story of the Master—the entire family got in on this part. They never did get to bed that night. The jailer made them feel at home, dressed their wounds, and then—he couldn’t wait till morning!—was baptized, he and everyone in his family. There in his home, he had food set out for a festive meal. It was a night to remember: He and his entire family had put their trust in God; everyone in the house was in on the celebration.

35-36 At daybreak, the court judges sent officers with the instructions, “Release these men.” The jailer gave Paul the message, “The judges sent word that you’re free to go on your way. Congratulations! Go in peace!”

37 But Paul wouldn’t budge. He told the officers, “They beat us up in public and threw us in jail, Roman citizens in good standing! And now they want to get us out of the way on the sly without anyone knowing? Nothing doing! If they want us out of here, let them come themselves and lead us out in broad daylight.”

38-40 When the officers reported this, the judges panicked. They had no idea that Paul and Silas were Roman citizens. They hurried over and apologized, personally escorted them from the jail, and then asked them if they wouldn’t please leave the city. Walking out of the jail, Paul and Silas went straight to Lydia’s house, saw their friends again, encouraged them in the faith, and only then went on their way.

What do we learn?
–When all seems lost…know God will prevail. The work He starts in you will be finished as long as, through it all, we trust and obey.

Reflection: Am I allowing the Holy Spirit to lead in bad times as well as good times? My present circumstances do not define who I am but what God will do in and through me. Do I sing His praises even in the bad times, with gratitude and thanksgiving? 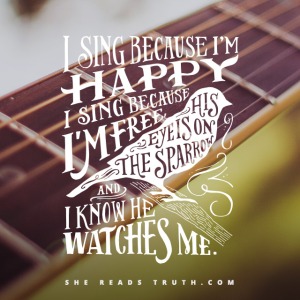 Dear Heavenly Father, We bring all of us to You. Save us from ourselves. Help us to see beyond the circumstance by lifting our eyes up, gently lifting our chins with Your precious hand, to look into Your face of mercy and grace. Help us to know You know and care. Turn our mess into a message for Your Glory and praise. In Jesus Name, Amen