We have an enemy who does not want us to read this book. That is why we must read it with God’s Holy Spirit helping us to SEE Jesus, the revealed Truth!

Christ is the theme of this wonderful book. It gives an authentic portrait of the Lord Jesus as the triumphant One. No less than twenty-six times do we find in it Christ’s sacrificial title “lamb. In addition, we see a vision of the future of the Church and the world in relation to Him. We are saved and washed clean in His blood in order that we may be ready and eager for His return.

Please, stop, read slowly, from this pespective…It’s all about Jesus, the revealed Messiah, Lamb of God and King of kings! He is the Only One who saves us and brings us to God without blemish.

1-2 I watched while the Lamb ripped off the first of the seven seals. I heard one of the Animals roar, “Come out!” I looked—I saw a white horse. Its rider carried a bow and was given a victory garland. He rode off victorious, conquering right and left.

3-4 When the Lamb ripped off the second seal, I heard the second Animal cry, “Come out!” Another horse appeared, this one red. Its rider was off to take peace from the earth, setting people at each other’s throats, killing one another. He was given a huge sword.

5-6 When he ripped off the third seal, I heard the third Animal cry, “Come out!” I looked. A black horse this time. Its rider carried a set of scales in his hand. I heard a message (it seemed to issue from the Four Animals): “A quart of wheat for a day’s wages, or three quarts of barley, but all the oil and wine you want.”

7-8 When he ripped off the fourth seal, I heard the fourth Animal cry, “Come out!” I looked. A colorless horse, sickly pale. Its rider was Death, and Hell was close on its heels. They were given power to destroy a fourth of the earth by war, famine, disease, and wild beasts.

9-11 When he ripped off the fifth seal, I saw the souls of those killed because they had held firm in their witness to the Word of God. They were gathered under the Altar, and cried out in loud prayers, “How long, Strong God, Holy and True? How long before you step in and avenge our murders?” Then each martyr was given a white robe and told to sit back and wait until the full number of martyrs was filled from among their servant companions and friends in the faith.

12-17 I watched while he ripped off the sixth seal: a bone-jarring earthquake, sun turned black as ink, moon all bloody, stars falling out of the sky like figs shaken from a tree in a high wind, sky snapped shut like a book, islands and mountains sliding this way and that. And then pandemonium, everyone and his dog running for cover—kings, princes, generals, rich and strong, along with every commoner, slave or free. They hid in mountain caves and rocky dens, calling out to mountains and rocks, “Refuge! Hide us from the One Seated on the Throne and the wrath of the Lamb! The great Day of their wrath has come—who can stand it?”

What do we learn?
–Revelation is not a riddle to be solved.
–Revelation means the “unveiling”.
–It is written in symbols, sent and signified by the angel to John. Just as the hard of hearing have a sign language. Each gesture is filled with meaning. So is every sign in Revelation. Symbols are wonderful and speak great truths. Listen, are our ears awake?
–It is foremost, about Jesus who comes again…TRIUMPHANTLY! 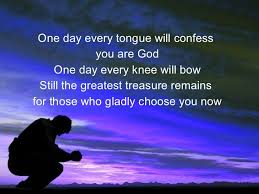 Dear Heavenly Father,
We love You with all our hearts, minds and souls and have a great desire to know You more. Let us be still in our thoughts of You and listen with awakened ears to Your message to us, individually and corporately as Your children, heirs with Christ, our Savior and Lord. In Jesus Name, Amen