Posted on November 28, 2016 by randscallawayffm

Psalms of Honesty and Truth

Illumination defined is:
–light that comes into a room, that shines on something, etc.
–knowledge or understanding

I will never forget the day we smelled smoke. We followed the smell which led to a flame leaping from the top of the hot water tank that was located in the basement of the parsonage where we were living at the time. We, (my daughters and I, Randy wasn’t home), could not understand how a fire could begin from a water source, but it did. Because it was an electric appliance, we flipped the breakers to see if the flame would cease. It did, but that put us in darkness. The fire department was called, telling them our problem. They came…with no flashlights. (Small town of volunteers.) We fumbled in the dark and found a flashlight for them. But wait, it gets better…

The Psalmist begins with describing God surrounded by dark clouds, hidden from view but ends with His Light that will come and illuminate the world, making things right, bringing understanding to the mysteries that surround Him. Questions will be answered with a new understanding. His knowledge will be made known. His Truth will reign supremely. Judgement will be swift for His enemies. Blessings will abound with reward for those who continue to walk in His Light avoiding traveling through dark, worldview thinking.

Illumination brings hope and peace. I rather walk in The Light, wouldn’t you?

The Lord is king!
Let the earth rejoice!
Let the farthest coastlands be glad.
2 Dark clouds surround him.
Righteousness and justice are the foundation of his throne.

3 Fire spreads ahead of him
and burns up all his foes.
4 His lightning flashes out across the world.
The earth sees and trembles.
5 The mountains melt like wax before the Lord,
before the Lord of all the earth.
6 The heavens proclaim his righteousness;
every nation sees his glory.

7 Those who worship idols are disgraced—
all who brag about their worthless gods—
for every god must bow to him.
8 Jerusalem[a] has heard and rejoiced,
and all the towns of Judah are glad
because of your justice, O Lord!
9 For you, O Lord, are supreme over all the earth;
you are exalted far above all gods.

10 You who love the Lord, hate evil!
He protects the lives of his godly people
and rescues them from the power of the wicked.
11 Light shines on the godly,
and joy on those whose hearts are right.
12 May all who are godly rejoice in the Lord
and praise his holy name! 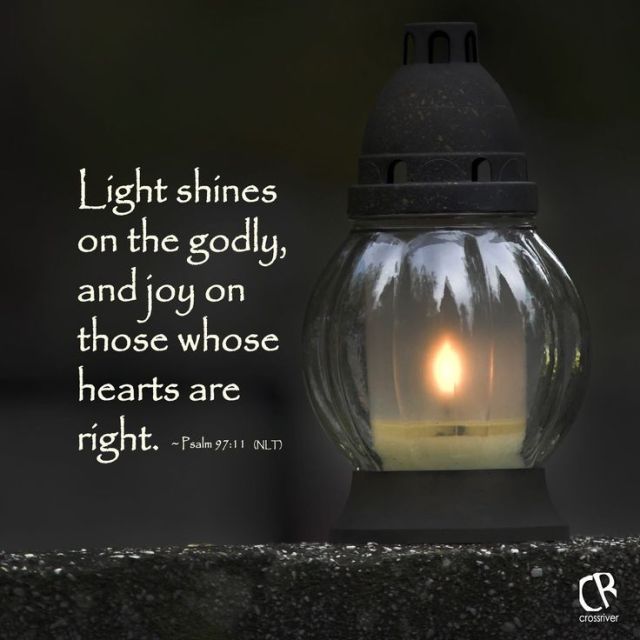 Yes, praise and extol the Lord! Rejoice in our salvation. Walk in His Light. Get out of the shade! May His Light be reflected on our faces today! May His Light shine through us, to illuminate the dark for others seeking help to see and know more about our Savior.