WHATEVER HE TELLS YOU DO, DO IT!

Posted on October 27, 2017 by randscallawayffm

John, The Love of God

How many missed opportunities do we have in life when we hesitate, analyze too long, pull back, or stop in mid action because of lack of confidence in ourselves? Is it fear? Is it just too much work? Do we love our routines more than our possible adventures? God hasn’t stopped inviting people to His work. Many have just stopped responding. Many are missing out on the Marvelous.

I think about this as we read about a wedding reception where the wine is quickly becoming depleted. The mother of Jesus knows He can remedy the situation helping to avoid the embarrassment their host (and probably relatives) will have. Jesus tells her “This isn’t my time. Don’t push. But, it’s His mom and He obeys her. Love expressed.

Take note at the command (I’m hearing the directive Jewish mom come out in Mary) as she tells servants standing around Jesus, “Whatever he tells you, do it.” Mary doesn’t know how Jesus will solve the problem, but she knows He can and will. No fear. Just faith.

Yes, as Jesus said to His young, new believers three days ago, “You haven’t seen anything yet!” First sign. First glimpse of His glory. 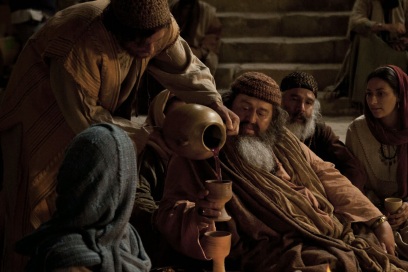 John 2, The Message
From Water to Wine

1-3 Three days later there was a wedding in the village of Cana in Galilee. Jesus’ mother was there. Jesus and his disciples were guests also. When they started running low on wine at the wedding banquet, Jesus’ mother told him, “They’re just about out of wine.”

4 Jesus said, “Is that any of our business, Mother—yours or mine? This isn’t my time. Don’t push me.”

5 She went ahead anyway, telling the servants, “Whatever he tells you, do it.”

6-7 Six stoneware water pots were there, used by the Jews for ritual washings. Each held twenty to thirty gallons. Jesus ordered the servants, “Fill the pots with water.” And they filled them to the brim.

8 “Now fill your pitchers and take them to the host,” Jesus said, and they did.

9-10 When the host tasted the water that had become wine (he didn’t know what had just happened but the servants, of course, knew), he called out to the bridegroom, “Everybody I know begins with their finest wines and after the guests have had their fill brings in the cheap stuff. But you’ve saved the best till now!”

11 This act in Cana of Galilee was the first sign Jesus gave, the first glimpse of his glory. And his disciples believed in him.

12 After this he went down to Capernaum along with his mother, brothers, and disciples, and stayed several days.

Think about it…
–Jesus obeyed his earthly mother. He loved her. He came as a servant. This first “act” showed the majesty in humbleness. Wow!
–His disciples believed Him even more because of this act.
–Are we ready to leave our routine, listen, and obey by doing whatever He tells us to do?
–Don’t hesitate, do what He tells you…if Jesus can transform water into wine, how will He transform us? Ooh. Think about it. Take all the time you need. I am.

Dear Heavenly Father,
You are God and we are not. You never sleep. You are always at work. You don’t need us to get your work accomplished yet you invite us to come along, learn, grow, and marvel at your majesty! Thank you, Lord. Continue to transform us into all you intended for us to be.
In Jesus Name, Amen