HE ONLY HAD EYES FOR GOD

Posted on December 15, 2017 by randscallawayffm

You can have all the greatest intentions in the world when joining God in His work, obeying His direction with all the right motivations…love for God, then others. You energetically serve with all that is in You because Your desire is to please God and help others find and follow Jesus, too. The evil one does not like it when you do this well with a heart fully devoted to God, having only eyes for Him. Evil will scheme in ways that shock you.

Here is a righteous man, at the top of the list of men chosen to manage in God’s church. He is describe as “a man full of faith and the Holy Spirit.” He is the only one on the list described this way. I would have loved to have known Stephen. I have known people like him whom I have admired. He was energetic, “brimming with God’s grace”, always doing things that pointed people to God…not himself. It was hard to find anything wrong with this man, so evil in men take the low road and tell lies behind his back, stirring people up to riot against this man of God.

The writer of Acts devotes time to the full testimony of Stephen because what happens to him is a pivotal point in the history of the growing church. With what was done to Stephen sets off many more persecutions of all who are devoted to God and His work. Bringing false charges isn’t new, they did it to Jesus. It worked then, why not now? Remember when Jesus told them it would happen this way? Beating, stoning, whipping, dying on crosses or eaten by lions becomes the new sport for the heathens who reject the Truth. Lying and backstabbing becomes the way to deal with these upstart church planters and do-gooders.

Please take time to read Stephen’s testimony in it’s entirety to catch the nuances and true meaning of recanting Jewish history and their relationship to God. What we need to focus on is how Stephen took the Jewish council on a journey through their own history with a message that continually led them back to God. His whole testimony was to remind them WHO God is and what HE has done. We can learn much from his testimony, too. 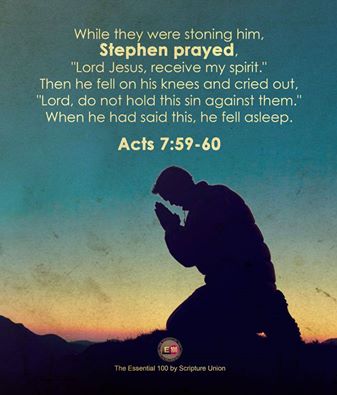 8-10 Stephen, brimming with God’s grace and energy, was doing wonderful things among the people, unmistakable signs that God was among them. But then some men from the meeting place whose membership was made up of freed slaves, Cyrenians, Alexandrians, and some others from Cilicia and Asia, went up against him trying to argue him down. But they were no match for his wisdom and spirit when he spoke.

11 So in secret they bribed men to lie: “We heard him cursing Moses and God.”

12-14 That stirred up the people, the religious leaders, and religion scholars. They grabbed Stephen and took him before the High Council. They put forward their bribed witnesses to testify: “This man talks nonstop against this Holy Place and God’s Law. We even heard him say that Jesus of Nazareth would tear this place down and throw out all the customs Moses gave us.”

15 As all those who sat on the High Council looked at Stephen, they found they couldn’t take their eyes off him—his face was like the face of an angel!

Acts 7, The Message
Stephen, Full of the Holy Spirit

Then the Chief Priest said, “What do you have to say for yourself?”

2-3 Stephen replied, “Friends, fathers, and brothers, the God of glory appeared to our father Abraham when he was still in Mesopotamia, before the move to Haran, and told him, ‘Leave your country and family and go to the land I’ll show you.’

After recanting history, in detail, about who God is, how He works and cares for His people, Stephen closes with:

51-53 “And you continue, so bullheaded! Calluses on your hearts, flaps on your ears! Deliberately ignoring the Holy Spirit, you’re just like your ancestors. Was there ever a prophet who didn’t get the same treatment? Your ancestors killed anyone who dared talk about the coming of the Just One. And you’ve kept up the family tradition—traitors and murderers, all of you. You had God’s Law handed to you by angels—gift-wrapped!—and you squandered it!”

54-56 At that point they went wild, a rioting mob of catcalls and whistles and invective. But Stephen, full of the Holy Spirit, hardly noticed—he only had eyes for God, whom he saw in all his glory with Jesus standing at his side. He said, “Oh! I see heaven wide open and the Son of Man standing at God’s side!”

57-58 Yelling and hissing, the mob drowned him out. Now in full stampede, they dragged him out of town and pelted him with rocks. The ringleaders took off their coats and asked a young man named Saul to watch them.

59-60 As the rocks rained down, Stephen prayed, “Master Jesus, take my life.” Then he knelt down, praying loud enough for everyone to hear, “Master, don’t blame them for this sin”—his last words. Then he died.

Stephen knew the history but also knew God and His Son well. His relationship with Jesus Christ was more important to him than life on earth.

Stephen spoke with wisdom and clarity. No wonder the council could not take their eyes off him.

Stephen did not fight back or try to defend himself, “He only had eyes for God.” His words pointed everyone back to God and ultimately to Jesus Christ, our Savior and Lord. Wow. I want to be more like Stephen.

When we are accused of something we did not think, say or do our first thought is to defend ourselves. “What?, I did not say or do that!” The Truth of Jesus Christ needs no defense. Evil knows that. Satan tries to distract our focus from God to our emotional selves by attacking us through others. He will use half truths, twisted lies and your own words taken out of context. Don’t fall for that. Cast your eyes on God. Examine Your heart. If the motives are pure, there is nothing to defend. If they were not, learn, apologize and move on.

“Pray for those who persecute you”, Jesus taught earlier to his followers for this very reason. We are his followers today. We must pray for those who lie behind our backs. Praying keeps us focused on Truth. Praying sincerely for the souls of our enemies keeps the anger with the need to defend ourselves in check and melts the bitterness in our hearts. Look up, like Stephen, and only have eyes, hearts, minds and souls for God.

“All those who sat on the High Council looked at Stephen, they found they couldn’t take their eyes off him–his face was like the face of an angel.”

How will we be remembered?

Pay attention to the last sentence, “Saul was right there, congratulating the killers.” Tomorrow…God uses persecution to scatter the believers from their comfort zones and into the world to grow His church!

Dear Heavenly Father,
What a wonder You are! Blessed be Your Name. Your servant, Stephen, teaches us and humbles us greatly with his witness. May what we think, say and do bring You glory, honor and praise all day long and into the night.
In Jesus Name, Amen