BEING LED INSTEAD OF LEADING

Posted on December 18, 2017 by randscallawayffm

Extreme “Type A” people like to be in control of the situation. It is the greatest tool in their belt. The first thought of this personality type isn’t to look for who is in charge but to be in charge in any given situation. They can be competitive, outgoing, ambitious, impatient and/or aggressive. It seems they are created, in born if you will, to be one who leads. Others are delighted to defer to their leadership who do not want to be responsible for leading themselves. Some readily prefer to follow one who seems to know what they are doing and are confident that what they are doing is right. Type A’s are leaders of passion with a little bit of arrogance thrown into the mix. A little bit of this and a lot of that…Shake it all up and you get Saul of Tarsus.

Saul, a devote Jew and scholar of God’s Law, thinks he is doing the right thing as he and his thugs roughly grab and drag new Christians out of their home meeting places and throw them in jail for preaching Jesus. Saul is in total control, probably even enjoying his new leadership role. He is gaining approval from the Council to extend his control beyond the borders of Jerusalem. So while the gospel is spreading…so is Saul’s leadership persecution of the Way. Who will win? WHO is in charge here? 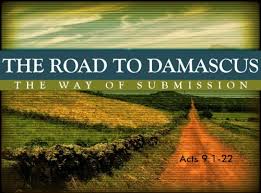 Acts 9, The Message
The Blinding of Saul
9 1-2 All this time Saul was breathing down the necks of the Master’s disciples, out for the kill. He went to the Chief Priest and got arrest warrants to take to the meeting places in Damascus so that if he found anyone there belonging to the Way, whether men or women, he could arrest them and bring them to Jerusalem.

3-4 He set off. When he got to the outskirts of Damascus, he was suddenly dazed by a blinding flash of light. As he fell to the ground, he heard a voice: “Saul, Saul, why are you out to get me?”

“I am Jesus, the One you’re hunting down. I want you to get up and enter the city. In the city you’ll be told what to do next.”

7-9 His companions stood there dumbstruck—they could hear the sound, but couldn’t see anyone—while Saul, picking himself up off the ground, found himself stone-blind. They had to take him by the hand and lead him into Damascus. He continued blind for three days. He ate nothing, drank nothing.

10 There was a disciple in Damascus by the name of Ananias. The Master spoke to him in a vision: “Ananias.”

11-12 “Get up and go over to Straight Avenue. Ask at the house of Judas for a man from Tarsus. His name is Saul. He’s there praying. He has just had a dream in which he saw a man named Ananias enter the house and lay hands on him so he could see again.”

13-14 Ananias protested, “Master, you can’t be serious. Everybody’s talking about this man and the terrible things he’s been doing, his reign of terror against your people in Jerusalem! And now he’s shown up here with papers from the Chief Priest that give him license to do the same to us.”

15-16 But the Master said, “Don’t argue. Go! I have picked him as my personal representative to non-Jews and kings and Jews. And now I’m about to show him what he’s in for—the hard suffering that goes with this job.”

17-19 So Ananias went and found the house, placed his hands on blind Saul, and said, “Brother Saul, the Master sent me, the same Jesus you saw on your way here. He sent me so you could see again and be filled with the Holy Spirit.” No sooner were the words out of his mouth than something like scales fell from Saul’s eyes—he could see again! He got to his feet, was baptized, and sat down with them to a hearty meal. 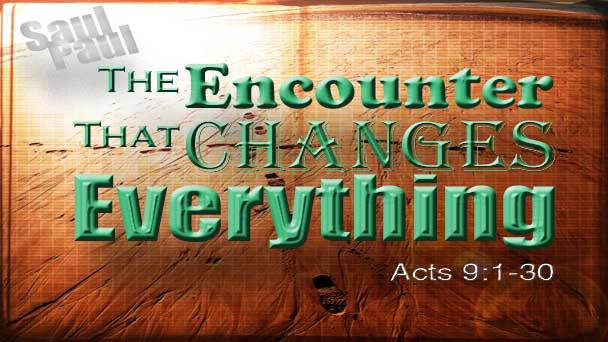 What is happening here?
–Overnight, Saul transforms from mighty leader to one who must be led. He cannot lead himself much less anyone else.
–His personality by nature is being altered, transformed and fine tuned as he surrenders to being led by God’s Holy Spirit.
–Jesus, the real One in Charge, blinds Saul to self motives and desires.
–Saul is blind for three days. He eats and drinks nothing. Could this be the process for Saul to die to self? (In three days, after dying for our sin, Jesus rose from the grave! Alive!) Mm.
–When we hurt others, it’s the same as hurting Jesus. “Why do you persecute Me?” –Jesus
–Ananias, led by the Spirit, must teach Saul how to be led, a scary assignment for this man of God! But he does it anyway, trusting God for the results.
–Saul, once the guy in charge, the leader with a capital L, is now one who is being led by the Holy Spirit.
–Saul will not turn back from his eye-opening experience. His mind has been changed and his heart transformed. He will now become Jesus’ personal representative to Gentiles as well as the Jews.

Think about it…
–God will use those same gifts and talents born in Saul to be used now for His glory and to help others, many others find and follow Jesus. Hallelujah! What a Savior!
–Saul not only as a change of heart but of name. He will now be known as Paul, the passionate, humbled but tenacious, representative of Jesus Chris, His Savior and now Lord. He is led by the Holy Spirit in an intimate relationship with God through Jesus Christ.
–One of many examples of Paul’s attitude shift:
“As for me, may I never boast about anything except the cross of our Lord Jesus Christ. Because of that cross, my interest in this world has been crucified, and the world’s interest in me has also died.” Galatians 6:14

Are we sometimes “blinded” by our own leadership versus being led by the Holy Spirit?

Dear Heavenly Father,
You are God and we are not. You are in charge and we are those to be led by Your Holy Spirit. Forgive us when we step ahead of You as if we think we know what is best. Continue to transform us to be all you intended for us to be and do.
In Jesus Name, Amen