Posted on January 3, 2018 by randscallawayffm

I’m sure you have heard the statement of encouragement, “When one door closes, another one opens” after you have faced a disappointment? Sometimes we have to face a few closed doors until that right door opens, don’t we? Did it ever occur to you that God’s Holy Spirit that says no now is saving you for God’s best later?

We had money down on a house that was being finished in a great, desirable addition. We had not quite closed the deal to sell the home we were in so we could not finalized the deal on the new home but we were more than ready to move in. One evening we visited the new house after work to see the progress. As we walked in the front door an overwhelming spirit came over both of us. I turned to Randy and said out loud, “This is not our home.” The Holy Spirit just told me. He agreed. It was not to be. The timing was all wrong.

A few months later, the “right” house for us became available around the corner. Our home sold and in a couple of weeks the deal on both houses were completed. God’s timing means everything. When you listen for His Holy Spirit to guide you and you obey, He leads to His best. Every time.

For Paul, God’s Holy Spirit turned him away from taking good paths to taking the best path. God did so in a dream or vision for Paul. “Come of here to Macedonia!” shouts a man in his dream. So the next day, Paul, along with his new mentee, Timothy set sail. There he met Lydia, a new believer, who supported God’s work with a “surge of hospitality”.

See what happens when we quickly obey the Holy Spirit’s leading? Even if it seems disappointing at the time or you don’t understand, His Spirit will make all things clear eventually. I have had several “Ah, ha, now I get it” moments throughout my life. I’m sure you have, too! 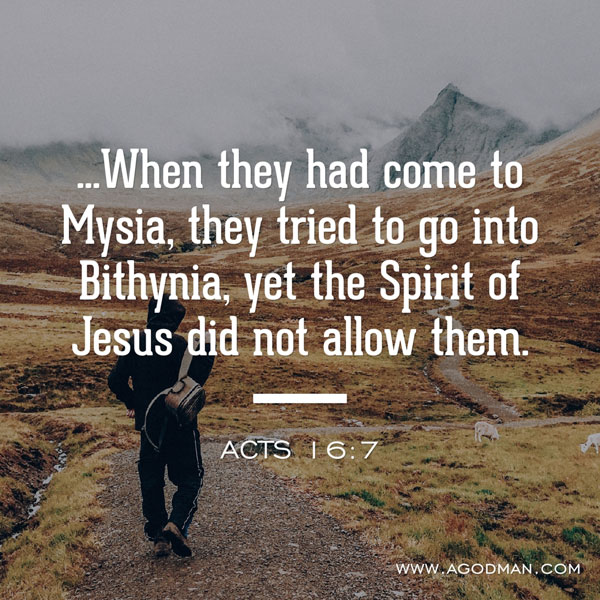 Acts 16, The Message
A Dream Gave Paul His Map
16 1-3 Paul came first to Derbe, then Lystra. He found a disciple there by the name of Timothy, son of a devout Jewish mother and Greek father. Friends in Lystra and Iconium all said what a fine young man he was. Paul wanted to recruit him for their mission, but first took him aside and circumcised him so he wouldn’t offend the Jews who lived in those parts. They all knew that his father was Greek.

4-5 As they traveled from town to town, they presented the simple guidelines the Jerusalem apostles and leaders had come up with. That turned out to be most helpful. Day after day the congregations became stronger in faith and larger in size.

6-8 They went to Phrygia, and then on through the region of Galatia. Their plan was to turn west into Asia province, but the Holy Spirit blocked that route. So they went to Mysia and tried to go north to Bithynia, but the Spirit of Jesus wouldn’t let them go there either. Proceeding on through Mysia, they went down to the seaport Troas. 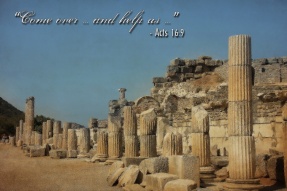 9-10 That night Paul had a dream: A Macedonian stood on the far shore and called across the sea, “Come over to Macedonia and help us!” The dream gave Paul his map. We went to work at once getting things ready to cross over to Macedonia. All the pieces had come together. We knew now for sure that God had called us to preach the good news to the Europeans.

11-12 Putting out from the harbor at Troas, we made a straight run for Samothrace. The next day we tied up at New City and walked from there to Philippi, the main city in that part of Macedonia and, even more importantly, a Roman colony. We lingered there several days.

13-14 On the Sabbath, we left the city and went down along the river where we had heard there was to be a prayer meeting. We took our place with the women who had gathered there and talked with them. One woman, Lydia, was from Thyatira and a dealer in expensive textiles, known to be a God-fearing woman. As she listened with intensity to what was being said, the Master gave her a trusting heart—and she believed!

15 After she was baptized, along with everyone in her household, she said in a surge of hospitality, “If you’re confident that I’m in this with you and believe in the Master truly, come home with me and be my guests.” We hesitated, but she wouldn’t take no for an answer.

Think about it…
–When you don’t know which way to turn…take a nap!
–Pray for God’s guidance…seriously. He won’t let you down. He is always at work. He is always with us.
–Remember, its’ always all about God first and last. He invites us to His open door to help others find and follow Jesus!

Dear Heavenly Father,
Thank you for always being with us. Thank you for delighting in the details of our lives! Thank you guiding us and helping us navigate this world. Thank you for giving your best. Thank you for the opportunities to join You in Your work! We praise You and give You all the glory and honor.
In Jesus Name, Amen