Our Creator made and controlled the waters with mere words, “Separate”! And the waters were divided and controlled. Did God know how important water would be to our lives as He directed the waters to separate?
Did He know as He worked on Day 2 and 3 that he would later create human bodies that would be made mostly of water?
Up to 60% of the

human adult body is water. According to H.H. Mitchell, Journal of Biological Chemistry 158, the brain and heart are composed of 73% water, and the lungs are about 83% water. The skin contains 64% water, muscles and kidneys are 79%, and even the bones are watery: 31%. 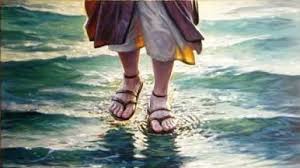 Did God prepare the waters to delight us? There is nothing more enjoying that to sit by a bubbling flowing stream or look out over a lake.

How about looking at magnificent falls of water over the mountains? It is even more fun to get in and enjoy the refreshment water brings to our whole being. Did God know we would enjoy the beautiful waters on earth, even finding peace in looking over the expanse of oceans of water?
The answer to all these questions are YES!
As we learn in school, water is one of the essentials of life itself. We can go without food for a few days but not without water. So it stands to reason that God would provide for his creation in this way. 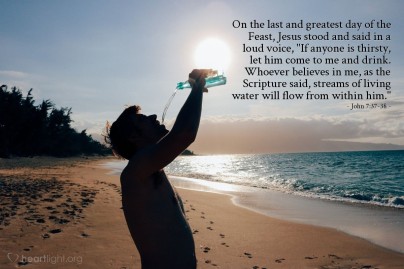 As God stood and separated the waters, did he tell Jesus the symbolism of Living Water and how Jesus would tell us that we would “thirst no more” if we believe in Him? Water is life. Jesus is life. Jesus was there “at the beginning”. Imagine the conversations they must of had as all was being created! God’s Word is full of symbolic references to water.

I think God enjoyed Day Two and Three forming the waters that would sustain life for all who would inhabit the earth.

How can we dismiss THE God who created the waters, sky and sea, into a uniquely planned continual cycle of water evaporating from the surface of the earth, rising into the atmosphere, cooling and condensing into rain or snow in the clouds, and then falling again to the surface as precipitation. Yes, that’s our God! He gives and sustains Life in all ways.
Why? Because God loves us!
Genesis 1 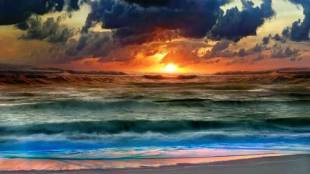 6-8 God spoke: “Sky! In the middle of the waters;
separate water from water!”
God made sky.
He separated the water under sky
from the water above sky.
And there it was:
he named sky the Heavens;
It was evening, it was morning—
Day Two.
God spoke: “Separate!
Water-beneath-Heaven, gather into one place;
Land, appear!”
And there it was.
God named the land Earth.
He named the pooled water Ocean.
God saw that it was good.

11-13 God spoke: “Earth, green up! Grow all varieties
of seed-bearing plants,
Every sort of fruit-bearing tree.”
And there it was.
Earth produced green seed-bearing plants,
all varieties,
And fruit-bearing trees of all sorts.
God saw that it was good.
It was evening, it was morning—
Day Three.
God also caused plant life to appear on the earth: the grasses, the seed-producing herbs, and the fruit-bearing trees. God decreed that each would reproduce “after its kind,” which helps to make possible order in nature. God has set reproductive limits for both plants and animals (Gen. 1:21) because He is the Lord of Creation. There’s no suggestion here of any kind of “evolution.” God was preparing the earth for a habitation for humans and for animals, and the plants would help to provide their food. A third time, God said that His work was good (v. 12).
God has now created three special “spaces”: the land, the seas, and the expanse of the sky. During the next three creative days, He will fill these spaces. 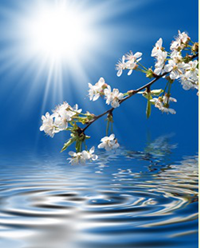