THE CERTAINTY OF DEATH AND TAXES

Posted on August 10, 2020 by randscallawayffm 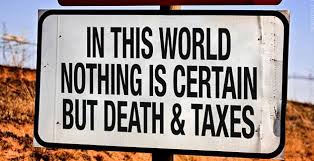 “Our new Constitution is now established, and has an appearance that promises permanency; but in this world nothing can be said to be certain, except death and taxes.”
-Benjamin Franklin, in a letter to Jean-Baptiste Le Roy, 1789
However, Franklin’s letter is not the origin of the phrase, which appeared earlier in Daniel Defoe’s The Political History of the Devil.
“Things as certain as death and taxes, can be more firmly believ’d”. –Daniel Defoe, The Political History of the Devil, 1726.
ALSO in The Cobbler of Preston by Christopher Bullock (1716) “Tis impossible to be sure of any thing but Death and Taxes…”
This seems to be the human consensus about death and taxes in our worldview. But what does Jesus say?

Just to recap what previously happened, three of Jesus’ disciples have just witnessed the glory of God in the transfiguration of Jesus Christ on a mountain top. They even heard God speak to them and were told, “Listen to Him, (Jesus)”! They fell on their knees and worshiped God in fear, awe and humility. Intimacy with Jesus grew for they have seen the power of God in and through Him.

As Jesus and His Three come down the mountain, the mission and work of seeking to save the lost, coupled with healing, continues.
Now Jesus gathers all of the followers to teach them about death and taxes. Both are certain in this life, right?
Matthew 17
Jesus Predicts His Death a Second Time
22 When they came together in Galilee, he said to them, “The Son of Man is going to be delivered into the hands of men. 23 They will kill him, and on the third day he will be raised to life.” And the disciples were filled with grief.
The Temple Tax
24 After Jesus and his disciples arrived in Capernaum, the collectors of the two-drachma temple tax came to Peter and asked, “Doesn’t your teacher pay the temple tax?”
25 “Yes, he does,” he replied. 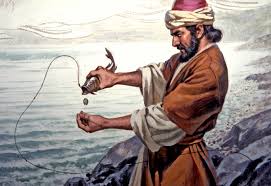 When Peter came into the house, Jesus was the first to speak. “What do you think, Simon?” he asked. “From whom do the kings of the earth collect duty and taxes—from their own children or from others?”
26 “From others,” Peter answered.
“Then the children are exempt,” Jesus said to him. 27 “But so that we may not cause offense, go to the lake and throw out your line. Take the first fish you catch; open its mouth and you will find a four-drachma coin. Take it and give it to them for my tax and yours.”
THINK ABOUT IT… 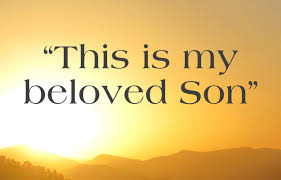 Jesus sits down for a talk about His death saying, “I’m going to die but not to worry, this is all part of God’s Plan.” “I will come back to life after three days.” All the disciples heard was “I’m going to die” and they “were full of grief”. This was all too much for them to understand at that moment.
Can you imagine what they might be thinking? This cannot be, not after all we’ve seen You do! You can’t leave us now, there is too much at stake. You have the power to overcome and revolution the world! You can’t die now. But this is human thinking, not God’s higher thinking. 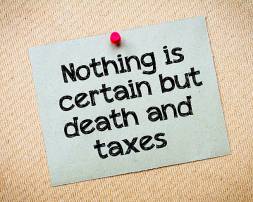 On top of all that, still reeling from what Jesus is saying, the temple government agents visit them with a request for taxes to be paid. Jesus, Master Teacher, takes this opportunity to bring Peter, “His Rock”, to greater understanding of what is most important and highly certain in this life…death and taxes…and Jesus is the answer to both.

“Go fishing, Peter!” Jesus sends confused Peter back to what he knows best, fishing! This act of obedience, mixed with a bit of fun for Peter, results in a miracle catch of four-drachma coin lodged in the mouth of the first fish he caught. Can you imagine wide-eyed Peter taking it from the fish’s mouth and giving it to the temple police? Jesus provides “for my tax and yours.” I’m certain that Peter never forgot this learning experience and probably retold the story many times! Wouldn’t you?

Death and Taxes are certain in this life. But what is also certain is the One who defeats death and puts an end to oppression and temple taxes. “For God so loved the world that he gave his one and only Son, that whoever believes in him shall not perish but have eternal life.” (John 3:16) 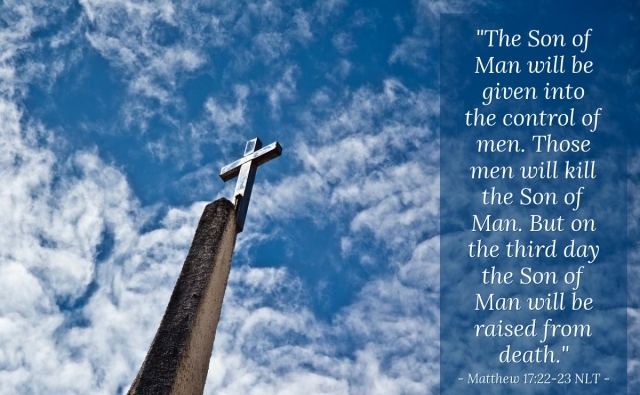 THIS IS CERTAIN: Jesus. By believing Jesus, who died for our sins once and for all, defeated death and rose again, who is alive and well, now positioned in heaven next to God as our advocate gives us eternal life. Jesus is even preparing where we will live in His Kingdom! We, who say yes to Jesus, live for Him and worship God alone are promised life eternal with no more taxes, tears, and other tragedies! We are free at last from all that is here to all that is in heaven. THAT IS CERTAIN!
HOLY PAUSE 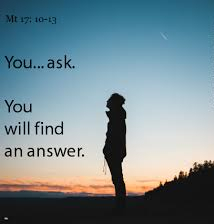 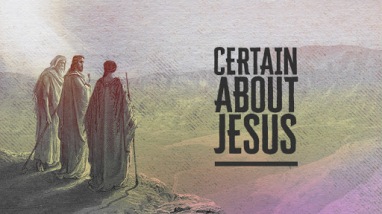 This is certain:
Jesus was, is and always will be Savior and Lord.
Believe and be saved.
In Jesus Name, Amen